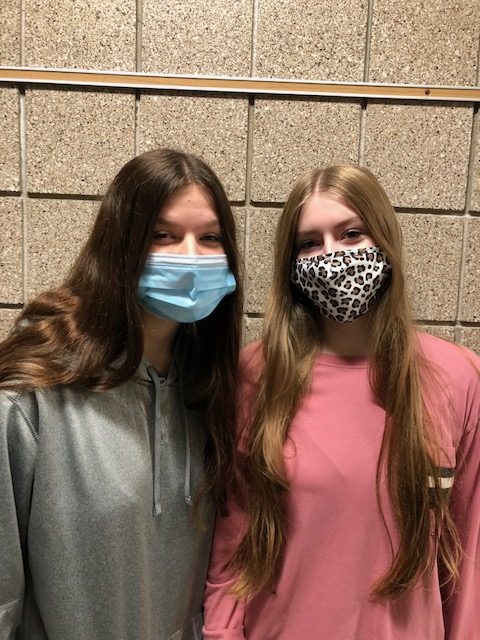 Juniors Jena Priem and Caitlin Starks have been friends since seventh grade. They had met in a Rube Goldberg class and have been inseparable ever since. “One of our favorite things to do together is hangout at each other’s houses,” Starks said.

Friends since the seventh grade, juniors Jena Priem and Caitlin Starks have maintained an easy and fun friendship. They have a bond that is not like others.

“We met during Rube Goldberg in seventh grade and were in the same group, so we were like ‘let’s be friends’,” Priem said.

Priem and Starks say they have a similar personality and this is what brought them even closer together.

“We find humor in everything so no one understands our humor. It is like we’re the same person,” Starks said. “She’s quite hilarious, caring, confident, cranky, open-minded, loyal, frisky and fuzzy.”

Priem and Starks are able to share many memories together that they will never forget.

“During a drama class in eighth grade, there was a game that involved tape on the floor and we had to go to the left or right side of the stage. It was Jena’s turn and she didn’t know where to go. She started crying and had to leave the room. The class was yelling at her because it was a competition and she couldn’t handle it,” Starks said.

Stark shares another memory that they have together.

“We were in a class, and a piece of gum fell out of the teacher’s mouth and landed on Caitlin’s foot. She started screaming and he picked it off and then she cried for a while,” Priem said.

While being able to easily share a laugh, Priem and Starks are able to work through just about anything.

“We get into disagreements quite often but it is nothing serious because in the end, it ends up being funny. We joke around and move on from it,” Starks said.

The two girls will continue their friendship with many laughs along the way.

“Just being in Jena’s presence is my favorite thing. Anything we do turns out to be really fun,” Starks said.