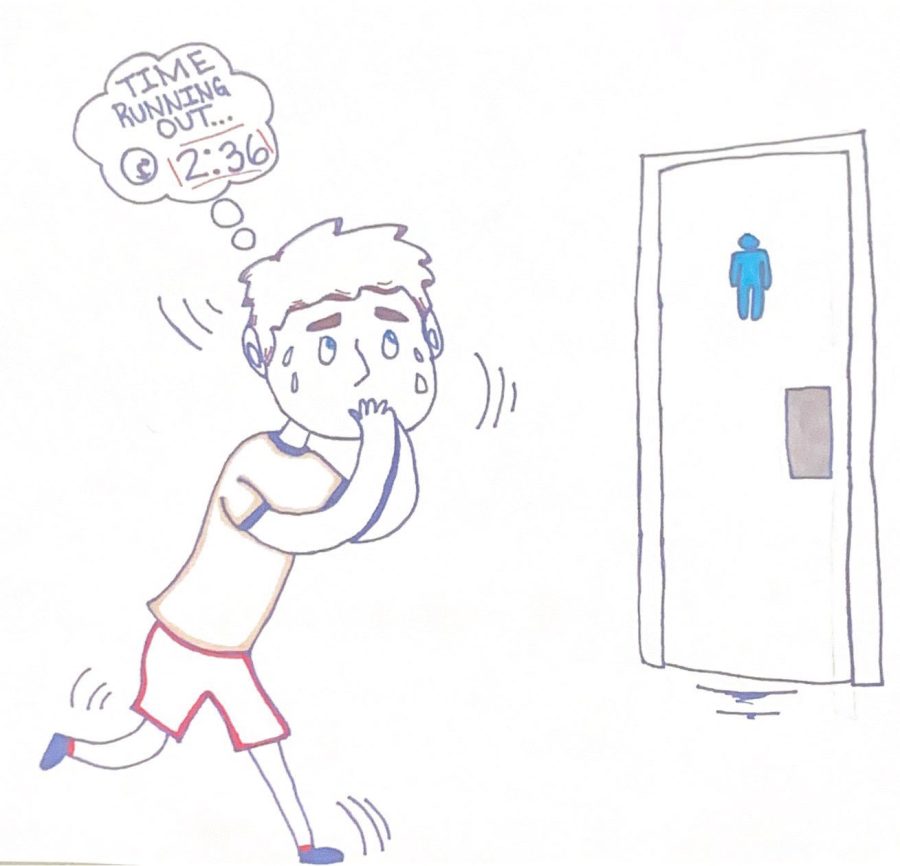 Editorial cartoon; students typically need to race to the bathroom in order to return to class before their pass expires.

For a couple weeks now, BHS has been working with a new pass system; SmartPass. In order to leave the classroom for any reason, students must sign in to their Chromebook or use their phone to fill out an online pass to leave. The pass then begins a 3-5 minute timer, giving a limited amount of time to complete whatever task is needed.
SmartPass has many different intended uses for it, including letting teachers know where students are in case of an emergency, getting to track students in case there is ever a question of where they were, and making sure the bathrooms are used appropriately. In the past, teachers used to sign student planners in order for students to go places. When the daily planners were no longer provided, there was no stable pass system in place for a while. Now, there is SmartPass.
While this pass is supposed to be a more efficient way for students to leave the classroom, some students consider SmartPass more of a hassle than anything. Needing to sign in to a computer every time one needs to use the bathroom or walk to the office ends up wasting more time than necessary, taking valuable class time away from students. Additionally, the timer is a bit of a dramatic response to the problems occurring in the bathrooms. Sometimes a bathroom trip just takes longer than five minutes, and putting a limit on it is seemingly unrealistic. Not to mention students don’t have any idea what will happen if they go over their time limit too many times. Will they lose bathroom privileges completely? It would help if the administration would clarify that.
The bathroom problem mostly occurs during the four-minute breaks in between classes when the “bathroom hangouts” are the most intense. Therefore, implementing a pass system that only takes care of the problem during class time is not as effective as the administration wants it to be. Some students say that the bathroom is even more crowded during passing time now that only so many students can be out at a time during class. The problem needs to be solved with the kids that are using the bathroom in an inappropriate manner, and the SmartPass system only serves as a burden for the kids who use their bathroom privileges responsibly.
How much surveillance on BHS students is too much surveillance? Hallway cameras already do the tracking, why add an extra element? The Red ‘n’ Green staff believes that there could potentially be better options to explore to fix the bathroom issues and the administration should look into something a little less suffocating. The Red ‘n’ Green also believes that if the system is going to continue, there should be more time on the timers and more students allowed in the bathrooms at once. Until then, juniors and seniors should continue to use their bathroom privileges responsibly, and the underclassmen should learn from the examples the upperclassmen are setting for them.